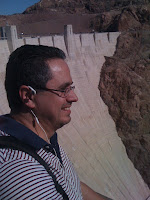 In our travel to Vegas with the FRC Video-Production-Tech team on our last day we had few free hours that we expended wisely, we visited the Hoover Dam, which is one of the greatest human made structures made between 1931 and 1935 and it is capable to generate more than two thousand megawatts that are utilized in part by California, Arizona and Nevada (That’s a lot of electricity).
Also we were able to run a successful live test from the dam with Brian Vasil, but the interesting thing about this, was… at some point I said something like “the Dam Hoover” and everyone start laughing about it… and I recall that the “dam” word is used also as an expression, so I was not so sure on the real meaning of the “dam” term and it became a fun words game between the group.
Because I’m trying to improve my English I start investigating about “Dam” significances and according to the Wikipedia, A dam is a barrier that divides waters. On writing there is a little difference between a barrier and a profane word, and that’s an extra “n”… so Dam is a barrier and damn is a profanity… the definition for “damn” is: a condemnation, usually by God or by a god, and a frequent profane word that came from Latin “Damna, Damnare” that means condemnation…
I was thinking how powerful can a word be… that’s why is wiser to hear, think and if it will be useful, to talk… like my father always said… connect your brain before you talk! A good reason for God to give us two ears and only one mouth. I’ll said it once… be wise, think twice! 🙂 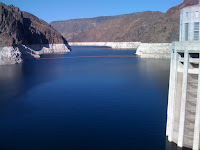 Look at the pictures of the Dam!