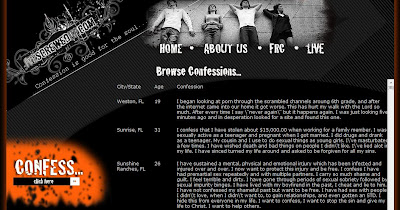 About a year ago or little more, my pastor Troy Gramling launched a series called Ivescrewedup.com about how often we made mistakes and how to deal with it. The series was accompanied by a website with the same name: http://www.ivescrewedup.com/ with the sole purpose to allow people to write and confess anonymously any mistake made on the past. The series was a great teaching series, but the website, over passed all expectative, and attracted controversy about if is a valid resource to confess to a computer instead of confessing to a priest in order to receive forgiveness and absolution to the sins. Media wrote several articles some in favor, some against and some neutral about the website… Yesterday, the website was once more time on the news at CNN and again attracted thousands of viewers as well as hundreds of new confessions and also hundreds of jokers and critics who were fascinated by the thousands of confessions. Ivescrewedup.com has been on the air since last year and often are people posting different kind of confessions. God looks to sincere hearts, and forgiveness came from heaven, not because we are good or we deserve it, but because the great and magnificent Grace of God.