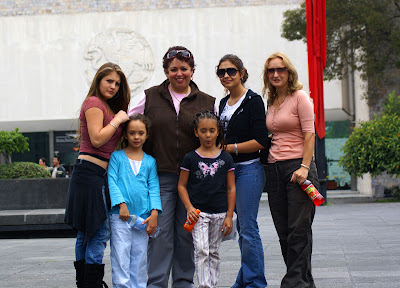 Part of my heritage is Mexican… the history of Mexico and it’s culture is represented in the National Anthropological Museum in Chapultepec Park. On the last day visiting my family we decided to immerse ourselves in culture and knowledge, so we all I headed off to the museum.

We found great wonders there! An area of particular interest was the museum’s “Theory Halls.” There we found…THE Evolution Theory. Eager as we all were to learn all we could about this strange theory, we payed very close attention. We learned, that the scientists who support this theory FIRMLY believe that “they” are related to… drumroll please… the monkeys. These brilliant scientists believe deeply that they have much in common with monkeys and even share a similiar appearance. One has to wonder if these scientists have access to a special mirror which enables them to see something I simply do not. Because when I look in the mirror and see my reflection staring back… in no way do I see resemblance to a MONKEY! But they do… and so they continue to seek the “lost link”.

They surmise this “lost link” is where evolution “skipped” a step between the big African apes and the first caveman. These intellectual minds believe that “Once upon a time, on a far remote day, a few million of years ago, there was a lonely carbon atom… This carbon atom must have been very smart because it just decided to change itself into a more complex form, creating complex DNA strings along the way. Finally a unicellular being was created. “Evolution” had begun, but guess what? That lonely, but very smart, unicellular being was bored, and started replicating itself so that it would have some one to play with, to have fun with and enjoy this newly evolved form of life it had created.

Those reproductions, by little “defects” created different creatures. Oh my! These creatures were not just unicellular, they partnered with other “copies” until more complex creatures were created in the oceans (fish). Then, wouldn’t you know it? The fish got bored and began to search for adventure OUT of the sea. Those fish conquered the land! Of course to do this… they had to master the art of spontaneously growing feet AND lungs! Just like that, with their strength of will! Imagine that! Later, the ex-fishes, now reptiles, looked at the sky and thought… gee wouldn’t it be great to fly? So once again, they “evolved,” this time into birds, with feathers and their reptile hands turned into beautiful wings… the air was conquered! But some of those birds that weren’t fond of flying in the great blue sky, remained in the trees and on the land.

They wanted something different… so they thought, why not develop a completely different kind of internal organ which would allow them to forgo the whole egg watching and hatching thing. They decided the females of the newly “evolved species would keep the new little creatures inside until they were ready to be born. Amazingly, some of those were born into this world as a kind of ape. As the ape species continued, they eventually grew tired of getting around on their hands and feet. So they decided to walk standing up and voila! Humans “evolved!” Makes complete sense, RIGHT?

The way I see it, this “theory” would be the comparable to tiny little peices of sand… all of the sudden… one day… deciding… all on their own…. to bind and stack themselves together… taller and taller until eventually they became…The Empire State Building! Come ON! SERIOUSLY?!? Why is it so hard for them to believe that there IS a superior mind capable of creating the PERFECT concept of life? It’s all explained in the Bible.

I’m sure you can imagine… this lofty “theory of evolution” brought many questions to the minds of my little ones. I had a lot of fun answering them… with real knowledge. Then we headed off to see the other exhibits exploring the history of the prehispanic cultures that lived in Central and South America… we all had a great time and shared many laughs along the way!